skip to main | skip to sidebar

Not a Goodbye, Just a See You Later

As Gordon Hayward's final desperation shot bounced from the backboard and off the front of the rim, I sat, in the front row of the student section at Lucas Oil stadium, and wondered if that was the closest Butler would ever come to a national championship. I was a hopeful Junior marketing student who lived and breathed Butler athletics, and as the confetti fell to the celebrations of a Duke championship, I could not help but think that THIS (a loss) would be the highlight of my Butler career. Little did I know, my senior year would be filled with even more excitement.

Looking back at my four years at Butler University, the saying "Time flies when you are having fun!" doesn't even do it justice. I can still remember my first Butler Basketball game, an exhibition against St. Joseph (Indiana), where new head coach Brad Stevens led the Bulldogs to a 25 point win. Not only was I excited to see my new team, but I was welcomed into the student section with open arms. A few games later, I was painted and dressed from head-to-toe in navy and white yelling at opponents and incapable Horizon League referees (some things never change) Just three years later, I had already served as the Marketing and Public Relations officer, and was elected as President of the Dawg Pound for my final year at Butler. I had seen Butler lose four out of five starters, I had seen Butler get beat at home by Loyola, I had seen Butler go to a national championship, and I had seen Butler lose Hayward to the NBA, but the biggest trend that I saw was a hard working group of coaches and players that knew how to win.

To say that the basketball team is the only team at Butler who excels through hard work and mental toughness would be discrediting the rest of the Butler athletic teams. I watched as the Football team went from a winless season, to an 11-1 championship ending run just a few years later. I watched as the cross country team continued their conference domination. I watched the men's soccer team post a top-5 national ranking through an undefeated regular season. I saw the women's soccer team and our volleyball team win their respective leagues. I witnessed the women's basketball team playing in the post-season NIT tournament. I saw our softball team break records and make it all the way to a conference championship game. I watched as star players not only went to class, but also participated and contributed to discussion. I watched the Butler Way unfold each and everyday on and off the court.

Surrounded by the Colts, Pacers, and IU fans, Butler might never sell-out every game, or be a frequent feature on the news/Indy star, but if I have learned one thing following Butler athletics, it is that Bulldogs thrive as underdogs. Butler will continue to stay true to itself, and its fans should be proud of what has been accomplished over the past few years. As we watch more and more student athletes come and go, we are reminded that there is more to life than just sports, but with all of the negative and immoral happenings right now in college athletics, it is sure refreshing to support a team like Butler.

I will forever remain a Butler fan and follower, and someday down the line would love to be able to work and give back to the organization that taught me everything I know. To those of you who have shown me the ropes and laid the foundation for the Butler Way, I cannot thank you enough. To those of you to come and who will continue to add to Butler Nation, I wish you nothing but the best and am sure that you will have an experience of a lifetime. A Butler degree is now worth more than it used to be, and I argue that the hard work of individuals like Matt Howard, Connor Burt, Matt Lawder, Brittany Bowen, Jesse Wolfe, and countless other student athletes had a lot to do with that.

This update marks my last post as acting President and after I log off, the blog will be handed to our newly elected Public Relations officer Whitney Martin. I started my own sports opinion blog for those of you who are still interested in reading my updates, as I am sure many will be about Butler. As they say, I will be a Butler Bulldog for life. The blog can be found at http://contenderrender.blogspot.com. I hope that you have enjoyed my blogging and I know that Whitney will do a great job from here on out! 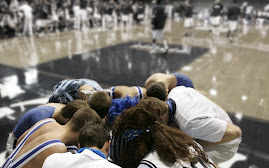 Why Do Students Not Come to Games?